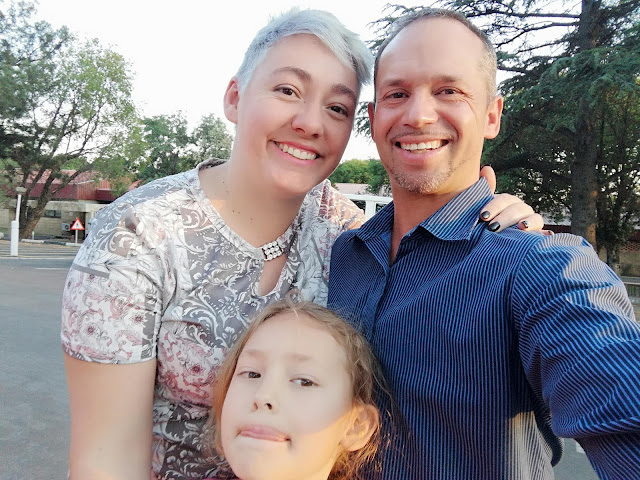 They say when you get married you get too busy to do anything else. I suppose that can be true for couples who never lived together and there’s a whole new dynamic to get used to. However, myself and Michal had been living together for some time already. Falling into the rhythm we had developed didn't take a huge leap. So why was my last post about getting married?

I got tired. Not just physically but mentally. It has taken me a frustrating six months to get used to my Sleep Apnea machine. I also spent a great deal of time recovering. I was on several forms of medication to assist my brain functions due to oxygen deprivation. Now my brain was getting the oxygen it needed and I was getting giddy. So after consulting with my doctor I began to wean myself off all my medication (slowly). It took about 3 months. I hit a horrible slump and panicked thinking I stopped them too soon, but no fortunately it was something else playing havoc with my hormones.
The interesting thing about the medication I was taking, it really took the edge off PMS. Now without them I felt the full force of it. Severe depression, anxiety, bloating, eating like a beast and images of stabbing my husband when he opened his mouth. I still haven’t got the hang of it, but I realize what it is and only have to suffer through it for 3 days every month.

I have also gathered that I have horrible sleeping patterns. The sleep apnea machine times how long you use it and how many apneas you have per hour and and and. So now I have documentation on my sleep and wow its horrendous. I am not sold on 8 hours. I don’t think we all need that much. I’m one of them. I can get a solid 8 hours in maybe once a week but then I need 5 to 6 hours and I’m running. And it’s not like I don’t try for 8 hours. My internal clock wakes me up and then I’m wide awake. And no I don’t want to try medication to sort that out. I am going to accept that that’s how my body works. I am already struggling with the weight gain and cravings the previous medication gave me. Now I feel like I have that under control 80% of the time.

I was not feeling Christmas this year. Did I mention I wrapped my daughter’s gifts on Christmas morning? Yeah. But I survived and I’m beginning to revive. Starting a rap song there.
So what am I thankful for 2018? I am so lucky I got to travel as much as I did. I love it. Our family always jokes about the positive side of living in Secunda. Anywhere you decide to go away from Secunda, it’s beautiful.

I feel like I improved my relationship with my daughter. Listened more. Dictated less. (Slightly). I began encouraging her to pursue her interests. We tried netball and hockey but after a week or two it fizzled. Also, I don’t think shouting at 7 year olds like it’s the end of the world to win a game is something a school should do, but I soon realized I am not a hockey mom either. I kept it to myself though and Sam eventually came and said “I don’t like hockey.” Cool I said. She does however love fondant. We began playing with it and created her first big cake this holiday. She loves watching Youtube videos on how they make different decorations.

Popular posts from this blog

December 15, 2017
I believe the best thing about a big party is getting to see family and friends that you don't often get to see due to distance and time. Time gets away from us all as we make our way through life.
Today is the birthday of someone very special in my life. My fiancé and very soon to be husband (if everything goes according to plan!) He entered my life some years ago. He was reserved and quiet. Exactly the kind of person I enjoyed yakking to. We lost contact and it was some years before we bumped into each other again.
This time he wasn't so quiet and reserved. I am glad he wasn't as we may have missed this opportunity to be happy. I remember the Christmas dinner he was introduced to the family. I think he was sweating. Even more so when he said he's going to ask my parents' permission (the very noble way of him) to marry me. I heard about his nerves afterwards.

Taking up the position of step father without a falter in his step. Providing us with tremendous suppo…
Post a comment
Read more

November 23, 2017
We are a blended family. What does blended mean? Well, divorce, separations, or death can cause a speed wobble on our way in life. And many times from this suffering and dark moments, something new can be born. Hard lessons are learnt and we are off to learn new lessons with new people. In our case step parents, children and adopted pets!
Currently, our "little" family consists of a little girl, her step father Uncle Michal, myself, 2 little dogs and 2 littler hamsters. Her biological father lives in a town about 2 hours from us. He has remarried and is a step dad to a girl and boy. I would say our setup is good but that is a whole other topic for another day. Michal has a son from a previous marriage, but that situation is somewhat more prickly. I have managed to glimpse the boy at school sporting events.
Let's start with the girl who'll tell you she's almost 7 years old. Of course a mother will brag. She is bright and has such a vivid imagination with a sensitiv…
Post a comment
Read more